Isleton officials poised to plead the 5th before grand jury 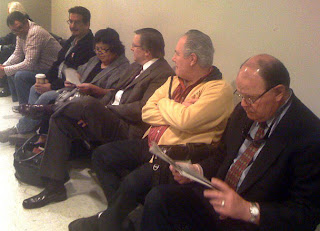 The entire city officialdom of Isleton marched into the Sacramento Superior Court house this morning, summoned before a grand jury probing city plans to allow a massive marijuana farm to be built there.

Council members, the police chief, the city manager, planning officials and others all huddled on the first floor of the courthouse waiting to be summoned before a closed session of the grand jury.

All of them except Police Chief Rick Sullivan are expected to invoke their 5th Amendment right against self-incrimination.

City Manager Bruce Pope said no one has any idea what the grand jury investigation is about, and officials complained that they were being intimidated by Sacramento County District Attorney Jan Scully's office.

Attorney Christopher Lee, who represents four of the people who received subpeonas, said a DA's investigator spent last night sitting outside City Hall while he tried to meet with his clients to discuss legal matters.

The police chief is the only one summoned who plans to answer questions. Sullivan, a 25-year veteran of the CHP, said he as nothing to hide and has done nothing wrong and will answer the panel's questions.

Other city officials also say they have done nothing wrong in connections with their approval of the Delta Allied Growers' plan to start a medical marijuana farm on the north edge of Isleton, a plan that is expected to pump at least $25,000 a month into the coffers of the cash-strapped city.

The grand jury is expected to try to question officials over the next three days, but it appears unlikely that the panel will get many answers.

The marijuana farm is being spearheaded by Michael Brubeck, nephew of jazz great Dave Brubeck, but the DA's office apparently has been having difficulty in locating Brubeck to serve him a subpeona.

City officials were told this morning that they will take an oath when called before the panel. The first witness emerged after about 20 minutes inside the grand jury room and identified himself as the assistant Sacramento County assessor John Solie, but said he could not discuss what transpired inside.